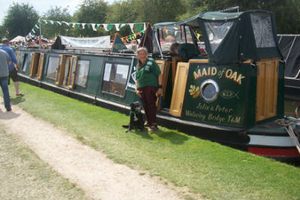 Peter was born in Worcester Park, Surrey, not a million miles from where his wife Julie was born (but 5 months later!). In 1950 he joined a cub pack at the primary school he attended and his teen years were absorbed by Scouting and motor bikes! (No, he wasn't a Mod or a Rocker!). He finished his education at Glyn Grammar School in Epsom and sort of drifted into accountancy, qualifying as a Chartered Accountant in 1968. Peter spent 12 years in the profession and then 5 years in commerce before becoming Head of Finance at the medium sized Trade Union - the Banking, Insurance & Finance Union. Alas no more, being subsumed into Unite. He retired 10 years ago when they moved to near Stafford (Wolseley Bridge) to be beside the T & M canal - non-towpath side and bought "The Taft".

His original acqaintence with Christianity was with the Scouts and monthly Church Parades, but he became more interested when he met Julie, who was already a committed Christian. It was through her leadership and guidance that he was Confirmed, at the same Church he had attended with the Scouts. After their marriage, they moved to Kingston upon Thames and became involved with helping the leadership at St Richard's Church, Ham. Now, Peter is involved with St Mary's Church, Colton as assistant Church Warden, treasurer and lay assistant, distributing the Chalice at some Communion services.

Peter's involvement in boating start when their daughter lent them her boat for a week's holiday and Julie was hooked. Their prominent location alongside the Trent & Mersey Canal means they enjoy regular visits from passing BCF boaters (and others). They hosted many BCF events, including the famous Barbecue Weekend, for many years.