I began my new life in Christ in a lovely little Anglican church in Plymouth on 4th July 1982. I was a divorced single mum of two young children and had been on my own for four years. I met Euan there and we were married three and a half months later! We now have a total of four children and ten grandchildren.

Although we met, married and lived in Plymouth for about fourteen years whilst bring up our children we both seem to have wandering feet. We had both lived abroad as children (me in Nigeria and Euan in Nigeria and Trinidad) and after losing our plumbing business in Plymouth during the recession in the '80s Euan retrained as a Technology teacher. We moved to Scotland (I'm Scottish and Euan is three quarters English and one quarter Scottish) to take up a temporary teaching job in Inverness. When this post wasn't made permanent we went to Birmingham. Since then we have continued to move up and down the country doing various jobs and now find ourselves in Wick in the far north of Scotland where Euan is teaching at the High School.

I am retired now but had always worked in an office. Amongst my many jobs I have been an Office Manager for a Family Mediation service, a PA to in a company which supplied metal to the aerospace industry and up until 2018 I worked as a PA to the owner of Freswick Castle in Caithness.

Our interest in the canals started when we bought a house in Birmingham that had the Stratford canal at the bottom of our garden. We bought an 18ft fibreglass day boat and spent many happy hours pottleing up and down the canal. We even spent a two week holiday in it! After a time we decided on a larger boat and bought and outfitted a 35ft narrowboat. Unfortunately, we both fell ill shortly after acquiring the boat and decided to sell it, and everything else (including our Harley Davidson motorbike) and move back to Scotland.

Our interest in the canals was revived when we started thinking about retirement. We have had several narrowboat holidays to see if we still liked being on the canals and if we thought we could live on-board permanently and we are very excited to say Yes! We hope to have our plans in place to make the move, hopefully next year but sooner if possible.

Because we have lived in many different places we have attended many different churches and appreciate the diverse ways our wonderful God is glorified. We enjoy most of the modern worship as well as the old, but wonderful, hymns. As long as teaching is solidly bible based we are happy.

The photo above was taken last summer whilst we were on the Oxford Canal. 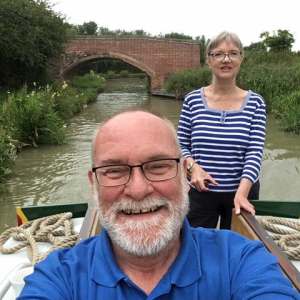