History of the Boaters' Christian Fellowship

In 1995 Nottingham couple Alan and Hazel Dilnot, committed Christians who owned a canal boat, wanted to get in touch with other like minded people. They wrote a letter to Waterways World magazine. The response was good, and in November 1995 held a meeting where 30 people gathered. The Boaters' Christian Fellowship was formed and the rest, as they say, is history.

From the start, BCF members became involved in public events like the IWA National, and work was started on the BCF church directory. BCF members started to become involved at local rallies but with little recognition at first. Sometimes they had to plead and use powers of persuasion to be allowed to introduce a Christian presence to these events.

We started to produce our own literature such as Still Waters and The Sword. Children's literature, such as Friends Afloat, Bertie the Boat, etc, have proved popular and the BCF magazine (The BCF Word) has won awards. Organisations, such as the Inland Waterways Association and the Canal and River Trust, now welcome our presence at events, and sometimes invite us to become involved in specific ways. In recent years we have taken part in several week-long missions around the waterways, in collaboration with local churches and with Canal Ministries and Waterways Chaplaincy.

Growth has been steady, and current membership is in excess of 600. The BCF logo is now a familiar sight on boats up and down the country. Since 2004, we have been a registered charity No 1101100 with our own constitution.

At the AGM in 2015, Alan and Hazel stepped down from their position as joint chair of the committee. BCF is immensely grateful to them for their 20 years of leadership, and for the initial vision that got it all going in the first place. 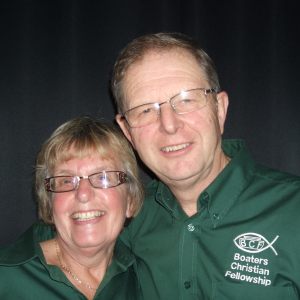