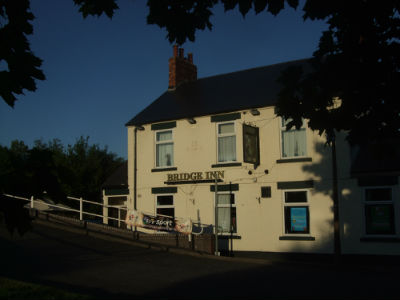 Ten BCF boats with 21 crew travelled up the Erewash Canal in June 2015 for the Cotmanhay Mission. BCF members Bob and Jessica Oakley, of the Bridge Inn, had invited the BCF to return there to give locals (in both senses of the word) tours of boats, boat trips and family fun in the pub garden. 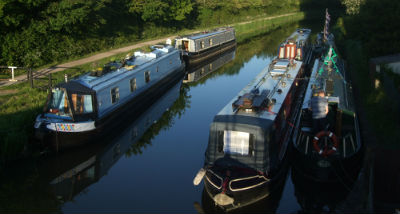 This was the first time Jan and I had been able to take part in one of these events; we really didn’t know what to expect. After a very windy crossing of the Trent (four carrots rolled off the worktop when the boat tilted as we exited the Soar!) we made use of the facilities at Trent Lock at the bottom of the Erewash Canal, topping up water and emptying the loo cassette. It would be a week before the next opportunity to fill/empty and we didn’t want any problems! At Long Eaton Lock we found the pound above was dry, but CRT was on the case, running water down from several higher pounds.

When we were able finally to get going again the CRT man on his bicycle helped with many of the locks. We discovered that another BCF member in front of us had given him a John’s Gospel. We tied up Jubilee opposite the Bridge Inn having to use the gang plank as the canal was shallow near the edge. Unlike at Crick a couple of weeks earlier, though, we wouldn’t be troubled too much by boats speeding past; the Erewash Canal is one which doesn’t see many visitors. People who don’t go there are missing a treat: it’s lovely. 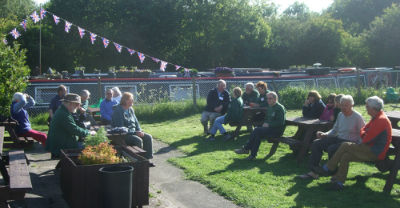 Not long after tying up we walked with the others to the Elim Church in Ilkeston, a mile away, for a prayer meeting. It was Wednesday 3 June and this was the first event. The Elim Church were our partners in mission and were very helpful, providing tables, chairs, a magician(!) and lots of prayer support. They had made the most of their local contacts, especially concerning the schools’ involvement, and had done a good job of publicising the events. 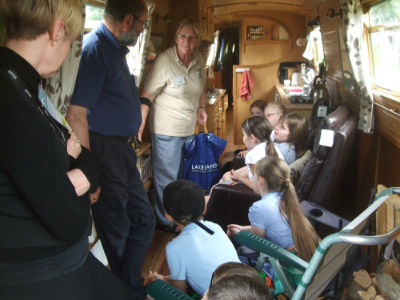 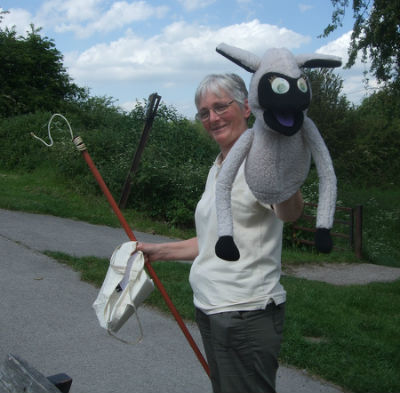 Thursday began with a prayer/briefing meeting in the pub garden at 8am. This was a bit of a shock to the system!  We’d been used to more leisurely starts on our cruising since March but, well, there was work to be done.

During the day some boats received visits from parties of schoolchildren while BCF members took school assemblies. This work with the local schools continued on Friday. Six boats gave mini “lessons” on canal history, water safety and water-related Bible stories.

We didn’t have to worry about an evening meal on Friday as Bob’s staff laid on a free barbecue for us all. Later that evening James and Hazel Bell on guitar/ukulele/vocals, with support from Jan on violin and me on recorder, performed folk music to a packed pub. This seemed to be appreciated, especially by one woman who danced as we played and didn’t want us to stop!

After Saturday’s prayers and briefing Bob and his team cooked breakfast for us all in the pub. James Bell tackled a particularly impressive plateful: a “Belly Buster” with three of most things!

Suitably fortified, the work of setting up for the afternoon’s family fun activities began in earnest. Gazebos and marquees were erected; the Elim Church’s van was loaded and unloaded; a bouncy castle arrived; stalls were set up and one BCF boat was prepared for working as a trip boat. 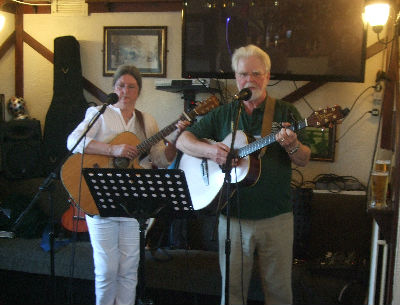 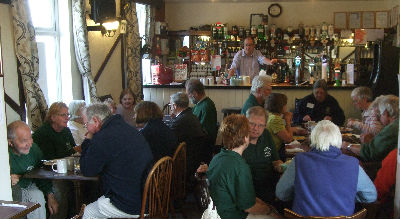 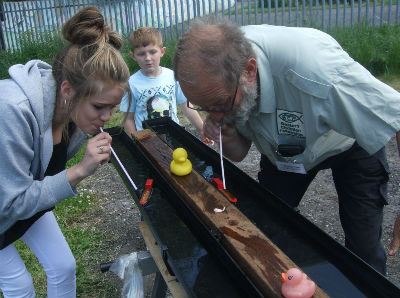 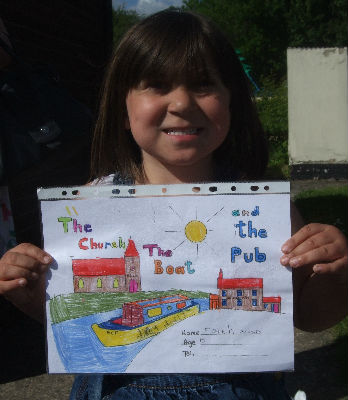 At 1pm the fun and games began. The bouncy castle heaved with small people; older children and adults enjoyed games of “frog racing” and blowing boats along a mini-canal.

The cake stall sold out; one man was heard to say that he’d spent £10 there. This must have been difficult as everything was just 10p! The cakes had been made by BCF members on their boats, together with a batch cooked up by the church’s youth group when they visited Essence. There were craft activities and face painting, all doing well.

In the beer garden, amid all the laughter and children rushing around, a prayer tent had been established for anyone who wanted to talk about spiritual matters or pray.

On the canal Eric and Sue Lewis operated a free trip boat service between the Bridge Inn and Stenson’s Lock, about a third of a mile away.

Their boat, Remus, is 35 feet long and was well suited to this task, being able to wind in the normal width of the canal. There were constant queues for the fifteen minute trip, this being one of the most popular activities.

Back in the pub garden a magician, Andy from the Elim Church, gave a show which included some good tricks (how DID he get that coin in the bottle?) interspersed with short Christian messages.

Throughout it all there was a strong wind blowing. One particularly violent gust towards the end of the afternoon put an end to the marquee which had been sheltering the craft activities. The wind didn’t blow away people’s enthusiasm, though; there was a good atmosphere and everyone we spoke to was having a good time. The cake stall sold out, the winner of the colouring competition was promised a trip on Alan and Hazel Dilnot’s boat Dilly-Dally and Bob’s takings were up!

The next day was Sunday; there were one or two missing from the 8am meeting, but we all went to the Elim church for a packed 10:30 service. James and Hazel led the singing and Don Martin spoke from Ecclesiastes 3:11 about eternity and the cost of following Jesus.

In the afternoon in the pub garden free cream teas were served to anyone who wanted one. They were delicious and there were enough for BCF members to enjoy them too. 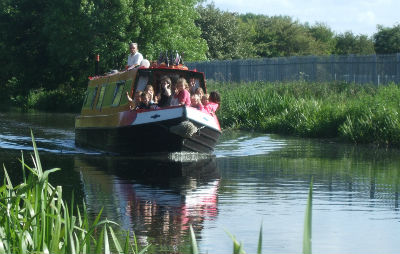 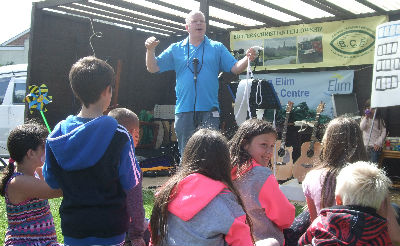 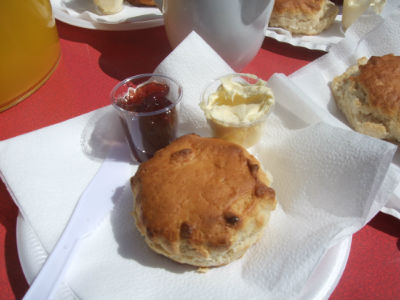 Remus continued to ply its trip boat trade, clocking up 150 passengers during the course of 19 trips and conversations about Jesus took place “spontaneously” on the towpath.

God had blessed us with fine sunny weather (while reminding us of his power!) and he had given us confidence to talk about Jesus to strangers. We rounded off the four days with a curry at the Shah Jahan restaurant in Ilkeston. The pastor of the Elim church, Anne Vesse and her husband Steve joined us for the meal. It was good to know that the Elim church would still be there to provide follow-up support in Cotmanhay when most of us had gone.

Our first BCF mission, then. At times, it was hard work. At times we were tired – but all the time we were assured of God’s presence and encouragement. As I write this we are on our way to the next mission at Tamworth. 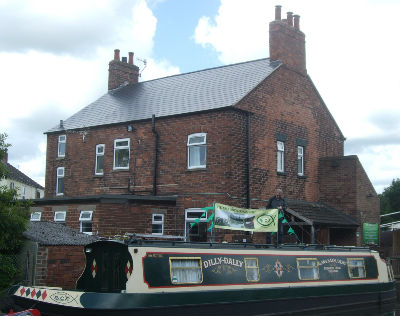 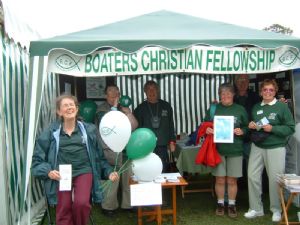 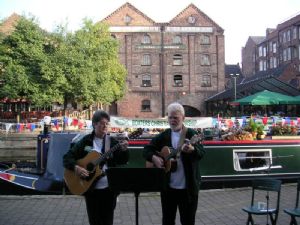